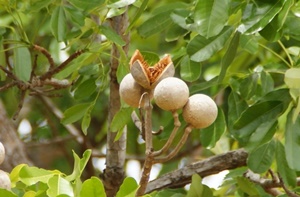 Physico-chemical properties of crude oil of Khaya senegalensis (Desr.) A. Juss according to bioclimatic zones in Chad

The mature seeds of Khaya senegalensis are from 2 to 2.5 cm long and weigh 289 g per 1000 seeds. These seeds contain about 67% oil by weight. This oil, which is fairly rich in oleic acid (66%), is used in West Africa for cooking, for cosmetics, as an insecticide and in traditional medicine. Prospecting to enhance the development of this oil in Chad, the present study aims to determine the physico-chemical properties of this oil according to bioclimatic zones. The density, acidity, peroxide value, moisture content and percentage of impurities were the parameters studied. The results showed that the crude oil of the seeds of K. senegalensis has the qualities close to those of other edible oils. The study also revealed that climate has influenced the physico-chemical parameters of this oil. Further and more research investigations are necessary to guide decisions on the valorisation and large-scale production of this oil.

In Chad, its uses have been in combination with other medicinal substances in order to treat stomach aches and syphilis. Used alone, the oil heals rheumatism, infants’ constipation and intestinal worms. Ayo et al. (2013) have reported that K. senegalensis seed oil is non-drying and consists of long chain fatty acids and bioactive compounds of therapeutic and prophylactic importance. In 2016, The Chadian authorities have begun to promote neglected sectors such as groundnuts, sesame, arabic gum (Non-Timber Forest Product) and shea (wild fruit tree). The surrounding populations of the species areas in Chad produce oil from these seeds and this oil is widely used locally and generates income to the communities. However, this Non-Timber Forest Product (NTFP) has not received any particular attention until now to be valorised. Therefore, with a view to highlight the importance of this oil, the present study aims to characterize its physico-chemical according to bioclimatic zones.

Quarter litre of crude oil of the species seed was purchased from each of 10 women oil extractors in each bioclimatic zone. In order to avoid mixing the selected oil with others, the oil extractions were attended. Furthermore, two samples of the collected oil were randomly selected from each zone for physico-chemical parameters determination.

Physico-chemical parameters of the species seed crude oil included density, acidity, peroxide value, saponification value, impurity content, moisture content and volatile matter. They were obtained in accordance with the standard procedure of the CCOQDA (Centre de Contrôle de Qualité des Denrées Alimentaires) of Chad for the chemical parameters and the French standards AFNT 60 214 and 60 212 for the physical parameters.

Oil density is the ratio of the weight of a volume of this oil at temperature T, to the weight of the same volume of water at the same temperature T (37°C for these samples). The density is always less than 1 and is not only for unsaturation function but also for oxidation or polymerisation. It is expressed in grams per ml or kilograms per litre and given by the following formula (Wolff, 1968):

P3: weight of filled pycnometer with oil expressed in grams

Fat acidity is the percentage of free fatty acids conventionally expressed as oleic acid (Houmba et al., 2016). There generally indicate the edibility of oils and is obtained by the relation:

N: normality of the solution;

P: mass of the test sample.

Peroxide index (Ip) is the number of milliequivalents of active oxygen per kilogram of fat. It is given by the formula:

V: number of milliliters of standardised sodium thiosulphate solution used for the test and corrected according to the results of the blank test.

M: mass of the test sample expressed in grams.

Index of saponification (Is)

M: mass of the test sample expressed in grams;

C1: number of milliliters of hydrochloric acid used in the blank test;

C2: number of milliliters of hydrochloric acid used in the test with the oil

The impurities are flocculated with phosphoric acid and separated from the oil by filtration. The filtration also retains impurities that are not soluble in acetone. The rate of impurities is obtained by the relation:

P0: weight of the filter alone;

P1: weight of the filter with impurities;

PE: weight of the oil.

The moisture and volatile matter contents are given by the formula:

P1: weight of the empty crystallizer;

P2: weight of the crystallizer with oil before heating;

P3: weight of the crystallizer with oil after heating.

Six parameters (density, acidity, peroxide, saponification, moisture and impurity) were determined to characterize the sample oil. This is because of the possibilities offered by the laboratory where the analyses were carried out.

The density of most oils, whether mineral or vegetable, is between 0.840 and 0.960 (Aïssi et al., 2009a). The density values obtained on K. senegalensis oil in Chad vary from one climatic zone to another. Thus, the oil samples of Guinean (0.880-0.890), Sudanian zone (0.910-0.920) and Sudano-Sahelian (0.890-0.900) zones are within the density range of most vegetable or mineral oils. On the other hand, oils of Sudanian zone are slightly denser than those from the other two zones. Thus, the oil from this zone is more unsaturated or more polymerised than those of Guinean and Sudano-Sahelian zones. These findings are comparable to those obtained in the literature included in table 2. There were also close to the values of olive oil where the standard shown by codex alimentarius is between 0.910 and 0.916 (Codex Alimentarius, 1999). This may be one of the reasons why the oil of Olive is used in cooking and cosmetics (Jøker and Gaméné, 2003; Idu et al. 2014a).

Acidity as the percentage of oleic acid is used to assess the degree of alteration of an oil (Aïssi et al., 2009b). Oleic acid is responsible of oil rancidity (Cissé, 2010), (Meftah et al., 2014). A low acidity value of an oil at ambient temperature may characterise the purity and stability of this oil (Tchiégang-Meguéni, 2003). The acidity values of the crude oil of K. senegalensis of the different climatic zones of Chad are between 1.33-1.44 mg/g, 1.26-1.37 mg/g and 1.77-1.97 mg/g respectively for Guinean zone, Sudanian zone and Sudano-Sahelian zone. These values are lower than most of the usual oils such as soybean oil (max.3mg/g), sunflower oil (max.4mg/g) and olive oil (2-6 mg/g) especially for virgin olive oil as a reference value. Thus, the oils of the seeds of K. senegalensis are pure, stable and the potentially edible oils. It should also be recognized that oils of Sudanian zone with value of 1.77 to 1.97 are more potential for trading.

The peroxide values of an oil evaluate the primary level of this oil oxidation (Meftah et al., 2014). Oil peroxide value assesses also the oxidative deterioration It is a very useful criterion with a satisfactory sensitivity to assess the first stages of oxidative deterioration of this oil (Louni, 2009). It is therefore linked to storage conditions and extraction methods. It also indicates the rancidity of an oil and a low peroxide value indicates that it is likely to be less rancid at ambient temperature. The peroxide values of 2.75-2.95 meq/kg, 2.85-2.87 meq/kg and 2.91-2.93 meq/kg for oils respectively of Guinean zone, Sudanian zone and Sudano-Sahelian zone, K. senegalensis seed oil can be considered less rancid oil at ambient temperature.

The saponification index states the fatty acid content (free and esterified) in the oil (Cissé, 2010; Meftah et al., 2014). Therefore, its high value can mean that the oil is potential for soap making.

The values of 161.00-163.00 mg/g for Guinean zone oils, 157-159 mg/g for Sudanian zone oils and 156-161 mg/g for Sudano-Sahelian zone were relatively high. These values may indicate that K. senegalensis seed oil contained fatty acids with high molecular weight that can be comparable to oils of palm, olive, soybean, cotton or flax (Ayo et al., 2013; Idu et al., 2014b). Therefore, this oil can be used well to make soap.

Oil moisture is essential for the degree of seed maturity as oil percentage increase when moisture content decrease like in the case of the fruit of olives (Cherrat and Mendel, 1997; Kroun et al, 2004). The standards call for a moisture content of 0.2 or less (Cherrat and Mendel, 1997). The results obtained on K. senegalensis oil of different climatic zones of Chad (Guinean zone: 0.05-0.07; Sudanian zone: 0.06-0.08; Sudano-Sahelian: around 0.04) showed the low moisture levels, although varying according to bioclimatic zones. This could be interpreted in several ways. So, either the water added to the paste to extract the oil was completely removed during separation, or the seeds used are fully ripe and free of any attacks that could increase moisture. In this context, Kroun et al. (2004) found for olive oil that incomplete removal of water during separation, an incomplete ripening of the seeds or a seed attack by diseases (insects, fungi, etc.) are among the factors that raise the moisture content. Therefore, with these very low moisture contents (0.04-0.08 overall), the oil of K. senegalensis seed can be easy to store for long-term use.

A crude oil, regardless of how it is obtained, even if it has been perfectly cleaned of all insoluble matter, contains a number of impurities which consist of dust and other foreign matter insoluble in organic solvents and which can be extracted and evaluated (Cherrat and Mendel, 1997). The findings of this study showed that the impurity values (Guinean zone: 0.15-0.17; Sudanian zone: 0.16-0.20; Sudano-Sahelian: 0.26-0.29) are slightly higher than the standard of 1% of impurities by the codex alimentarius for virgin olive oil. This difference can be seen in the way the oil of K. senegalensis is extracted in local areas. The standard impurity rate of 1% of Olive oil is from manufactured extraction. Thus, impurity matters should be less in comparison to traditional extraction (Ohimain et al., 2013). However, between climatic zones, the difference is insignificant. Therefore, much effort should be locally made in order to improve the quality of the oil of K. senegalensis in Africa and especially in Chad.

This study focusing on some physico-chemical parameters of crude oil of K. senegalensis seed showed that this crude oil presented the properties close to those of most known food oils. The study also revealed that climate has influenced the physico-chemical parameters of this oil. Further and more research investigations are necessary to guide decisions on the valorisation and large-scale production of this oil.