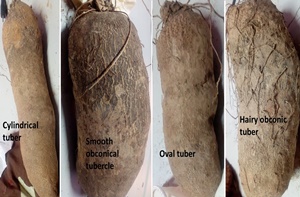 The present study described fifteen (15) cultivars of yams of the varietal group "Pémonon" cultivated in Burkina Faso. Twenty-seven (27) qualitative characters, ten (10) from the stems, nine (9) from the leaves, five (5) from the tubers and three (3) from the flowers were used to characterize the collection. The expeimental design was Randomized Complete Block Design replicated three times. The experiment was carried out during 2019-2020 and 2020-2021 seasons at the village of Onliassan, in the province of Sissili. The study showed a large phenotypical diversity. These collected qualitative data allowed to classify these cultivars into the complex of D. cayeninsis-rotundata species and to identify new nine (9) cultivars.

In West Africa, the yams of the complex Dioscorea cayenensis-rotundata represent more than 95% of the total production with a significant varietal and genetic diversity (Zoundjihékpon, 1993; Dumont et al., 2005). Thus, the yam plays a dominating role as subsistence and commercial crop with a high socioculturel importance (Baco, 2004). II The richness of its tubers in carbohydrates, proteins, vitamins and rock salt, makes it the principal source of carbohydrate for millions of populations (Mignouna et al., 2002; Lawal et al., 2012; Adejumo et al., 2013).

However, yam cultivation is faced to numerous biotic and abiotic constraints leading to production declines. In Burkina Faso, yam occupies an important place in the food production of local populations in the areas where it is grown. However, yam cultivation in Burkina Faso is subjected to the biotic and abiotic constraints hampering its production. Difficulties related to the conservation of harvested tubers are faced by yam growers (Sory, 2019). To these major constraints, we note the lack of knowledge of the cultivars encountered in Burkina Faso (Tiama, 2016). Nowadays, climate change leads to more frequent droughts, which forces producers to cultivate on less fertile soils and the need of tolerant or resistant cultivars use in order to adapt to the current climatic variability. These cultivars are those found and used by producers in the various traditional agro systems. Such cultivars are held by farmers without any scientific knowledge of their botanical characteristics. Furthermore, in Burkina Faso, some producers classify cultivars into a varietal groups (Sory, 2019). For example, the Pémonon varietal group in the local language Gourounsi consists of fifteen (15) cultivars characterized by the round shape of the stem, according to producers (Sory, 2019). This endogenous classification based solely on the shape of the stem could be deepened by using other descriptors of the yam in order to better describe the cultivars for a better varietal knowledge. This varietal knowledge will allow the valorization and conservation of yams grown in Burkina Faso.

The description of these cultivars grown in different traditional agro ecosystems will allow the safeguarding of this genetic heritage as well as its use in breeding programs. Moreover, information on the diversity of yams in Burkina Faso is almost non-existent due to the absence of in-depth studies at the national level. Scientific knowledge is limited to yams grown in the Passoré region (Tiama, 2016). It is to fill the gaps related to the lack of scientific data on yams grown on a large scale that this study was initiated. Thus, the general objective of this study is to contribute to the knowledge of yams of the Pémonnon varietal group cultivated in the south and southwest of Burkina Faso using morphological markers. Specifically, it will describe the specific characteristics of the cultivars of this varietal group and give their botanical classification.

The plant material comes from three provinces, namely Comoé, Noumbiel, and Sissili. It consists of 15 cultivars of the Pémonnon varietal group in the national language Gourounsi.

The trial was conducted during the 2019-2020 season in the village of Onliassan in the Sissili province (Figure 1). This village is located in the southern zone of the province at 585305 longitude and 1223498 latitude with a rainfall ranging from 900 to over 1000 mm (FAO, 1980). Texturally, the soils of the province are mainly composed of clay, silt and sand (FAO, 1980). However, the soil of our site is sandy-silty and therefore suitable for yam cultivation.

The observations were made at all the developmental stages of the plants, i.e. the juvenile stage, maturity and after the harvest, i.e. at the level of the tubers.

At the level of the stem

Morphological variations of plants at the adult stage

At the level of the stem

At the leaf level

At the flowering level

Morphological variations of tubers at harvest

Color of the flesh

Among the twenty-seven (27) morphological markers used to characterize the cultivars of the Pémonon varietal group of yam, only those related to the tubers were highly discriminating. The cultivars of the “Pémonon” group presented very discriminating characteristics with thorny on the one hand and without spines on the other hand, the whole leaves, simple and cordate, opposite or alternate.... These variables were described by Hamon et al. (1988) as stable at the level of the genus Dioscorea and can be chosen as varietal or species criteria.

Any yam, whole leaf, grown in West Africa for its tuber, is classified in the species complex D. cayenensis - D. rotundata (Hamon et al., 1986; Zoundjihékpon, 1993; Dumont et al., 2010). Coursey in 1976, classified round-stemmed yams in the species complex D. cayenensis - D. rotundata. Our results corroborate those of Zoundjihékpon, Hamon and Dumon. The 66% flowering rate observed in the cultivars studied is slightly lower than that observed by Dansi in 2000 and Tostain in 2006 in Benin and by Zoundjihékpon in 1993 in Côte d’Ivoire. In their study conditions, more than 70% of cultivars of the D. cayenensis - D. rotundata species complex had flowered. The low flowering rate in our study could be explained by climatic factors. According to Yolou (2016), flowering is a parameter that is greatly influenced by climatic and soil factors such as rainfall, temperature, light, photoperiod and soil type.

At harvest, tuber characteristics were very discriminating with nine modalities for tuber shape and six modalities for flesh color. Some cultivars can be assimilated to yams already described by some authors in West Africa. Thus, we have a group of cultivars with cylindrical tubers with striations showing the presence of varieties of the “kponan” group described by Hamon et al (1986).

The group of cultivars with bulky, ridged, thornless stems and oval-oblong tubers could be attached to the variety “agbalé” as described by Loko et al., (2014). The group of cultivars with thick, stubby, ridged and very spiny stems at the base, with large obconical-shaped tubers could be attached to the varieties of the “krenglè” group from Côte d’Ivoire and the “Boussa” group described by Tiama in 2016 in Burkina Faso. We also have the group of cultivars with a green, spiny stem with round tubers. The group of cultivars with a thin stem, weakly spiny at the base with cylindrical tubers called by producers “Pémoumonlo” or smooth skin in the local Gourounsi language. Tubers with a smooth brown surface and white flesh are classified in the species D. Rotundata and tubers with yellowish flesh are classified in the species D. cayenensis according to Dumont et al., 2006; Zoundjihekpon, 1993 et Vernier et Dansi, 2006. Thus, we can say that the Pémonon varietal group contains both D. Rotundata and D. cayenensis yams.

In this study, morphological approaches were used to assess genetic variability within the yam group ‘Pémonon’ grown in Burkina Faso. The main characteristics of the cultivars studied are the round shape of the stems, the whole leaf and the yellow or white color of the tuber flesh. We note the presence of various subgroups including round and very thorny stems or not, round, elongated or obconical tubers and yellow or white flesh. At the end of our study, we can say that the characteristics presented by the cultivars of the group Pemonon are those of the complex of species D. cayenensis - D. rotundata. Various studies conducted throughout the world have shown the great genetic diversity within this species. The study showed the presence of varietal groups such as “kponan” and “klenglè” in the south and southwest of Burkina Faso. Thus, ten morphotypes were identified in the ‘Pémonnon’ germplasm used by producers in Burkina Faso.