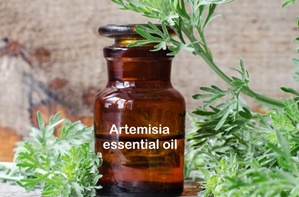 Tunisia is characterized by a climate that allows the proliferation of many plants rich in active substances with multiple biological activities and can replace the use of antioxidants and synthetic antibiotics. For this reason, Artemisia leaves and twigs were collected from the central region of Tunisia (Thala). The essential oil was extracted using hydro-distillation and analyzed using GC/MS, the antioxidant activity of Artemisia Herba-alba was evaluated by the DPPH test and the antibacterial powers against four bacterial strains was measured by the agar well method diffusion. GC/MS results showed that the main components of Artemisia Herba-alba essential oil were ?-thujone (23.9 %) and chrysanthenone (17.4%). Indeed, the results showed a potent antioxidant effect (85.2 % inhibition of free radicals DPPH) and the IC50 value was 84.8 µg/ml. Concerning the antibacterial activity, the oil was active against Gram-negative and Gram-positive bacteria. A strong effect was observed against Salmonella (29mm) and Bacillus (22.5 mm). To conclude, the antioxidant power and the antibacterial activity are strongly correlated with the chemical composition of the essential oil.

During the last decades, a concern about the undesirable effects of synthetic molecules intended for the fight against oxidative stress and bacterial infections. It therefore seems important to find an alternative to the use of synthetic antioxidants and conventional antibiotics (Rosenthal et al., 2012). Medicinal plants are considered as an essential raw material source for the discovery of new molecules necessary for the development of future drugs, without side effects (Benbelaïd et al., 2014). An example of these metabolites are essential oils and plant extracts (Rahman and Sattar, 2011). The genus Artemisia belongs to the Asteraceae family, Artemisia species are widely used in traditional medicine. Over 300 species of this genus are found mainly in arid and semi-arid areas of Europe, America, North Africa and Asia (Nikolova et al., 2010). The development of new antioxidants and antibiotics of better quality and of lower toxicity is essential. For this purpose, the investigation of plants represents an invaluable potential (Adams and Gmünder, 2007).

In this context, this study aims to evaluate the antioxidant activity of Artemisia Herba alba the essential oil collected from the region of Thala (Tunisia) by the reducing power and the inhibition of the 2,2-diphenyl-1-picrylhydrazyl radical (DPPH), as well as its antibacterial activity against gram positive and gram negative strains.

The extraction of essential oils was carried out by steam distillation, this method consists in placing the plant material on a grid located a few centimeters from the bottom of the extractor filled with water. The steam enriched with volatile constituents is condensed under the effect of a cooling system. The floral water is collected in a glass balloon and the separated essential oil is collected in an opaque glass bottle. The extraction was carried out for four hours at a temperature of 100 °C.

The antioxidant capacity of Artemisia Herba Alba essential oilwas evaluated according to the method described by (Braca et al., 2002). The diluted essential oil solutions were prepared in methanol. Ascorbic acid was used as the standard. Then 1 mL of 0.004% DPPH solution was mixed with 1 mL of sample solution, the mixture was then shaken and kept in the dark for 30 min and optical density was measured at 517 nm. The radical-scavenging activities, expressed as percentage inhibition of DPPH, were calculated according to the following equation:

The concentration of sample required for 50% inhibition was determined and represented as IC50 for each of test solution, which is expressed as µg/ml. All measurements were performed in triplicate.

The antibacterial activity of the essential oil was measured by means of the agar well diffusion test described by Güven et al.(2006) against four bacterial strains (Listeria monocytogenes (foodstuff 2132), Bacillus subtilis ATCC 6633, Escherichia coli ATCC 25922, Salmonella enterica (foodstuff)). A suspension (100 µl) of bacteria was spread on the plates of nutrient agar, then 6 mm wells were bored using a sterile cork borer. 60 µl of essential oil were placed into the wells. Finally, they were incubated at 37°C for 48 h and the antibacterial activity was evaluated by measuring zone of inhibition. The tests were carried out in triplicate.

All data were subjected to statistical analysis by the variance according to the GLM procedure of the software SAS 2002 and compared by Duncan multiple rank test (Duncan, 1955). The model used was:

30 compounds of Artemisia Herba alba essential oil are identified and listed in table 1, representing 99.5% of the oil. The chemical class distributions of the essential oil could be separated into five classes, Monoterpenes represented about 94.9 % of the total constituents of essential oils. Oxygenated monoterpenes constituted the main chemical class of the oil (74.2 %) and they were represented by 9 derivatives, with β-thujone (23.9 %), chrysanthenone (17.4 %), α-thujone (10.3 %) and 1,8-cineole (9.78 %) as main components. In addition, monoterpene hydrocarbons were represented by 11 compounds representing 20.7 % of all oil. Among these compounds, p-cymene (8.27 %), α-pinene (3.25 %) and Sabinene (3.31 %) were the most important. Sesquiterpenes constituted 4.6 % of all oil, among them oxygenated derivatives (3 compounds) represented only 1.5% while hydrocarbons (7 compounds) reached 3.1% of all oil.

The chemical variability of Artemisia Herba alba observed in the Tunisian areas (north-west, center and south-east of Tunisia) showed various compositions dominated either by a single component (α-thujone, camphor, chrysanthenone or trans-sabinylacetate)) or characterized by the presence of two or more of these compounds at appreciable levels (Boukrich et al., 2010). Indeed, in our study thujones (α-thujone and β- thujone) present the highest percentage 34.26% of all oil, as reported by Haouari and Ferchichi (2009) thujone are the components which give the specific odor and taste to Artemisia Herba-alba plants.

For further comparison, Chrysanthenone reached a high percentage (17.4%), according to (Neffati et al., 2008; Akrout, 2004) this component was not found in the Tunisian Artemisia Herba alba essential oil at such high concentrations.

The results reported in Figure 1 showed that for ach concentration, the antioxidant activity of Artemisia Herba alba is lower than ascorbic acid which is known by its high antioxidant potential. At a concentration of about 300 µg/mL, the exhibited greatest inhibitory activity reaches as high as 85.2 %. The IC50 value obtained for scavenging activity on DPPH radical were evaluated (IC50=84.8 µg/ml) and showed that the oil possessed a potent antioxidant effect (Table 2). from the results reported in Table 1, the property of Artemisia Herba alba of being a radical scavenging agent was attributed to its richness in oxygenated monoterpenens (Kadri et al., 2011)or to the synergistic effect of more than one oil compound (Younsi et al., 2016).

Disagreeing with our current data, (Akrout et al.,2010)reported that the essential oil of leaves of Artemisia Herba-alba growing in the wild in southern Tunisia exhibited low anti-free radical activity in the method (DPPH). However, the same result was found for different essential oils of aerial parts of Artemisa Herba-alba cultivated in southern Tunisia (Mighri et al., 2010).

The in vitro antibacterial activity of Artemisia Herba Alba was qualitatively and quantitatively assessed by the diameter of inhibition zone, MIC and MBC values.

The data indicated in table 3 that the oil was active against Gram negative bacteria and Gram-positive bacteria. An important effect was noticed against Salmonella enterica and Bacillus subtilis ATCC 6633 which were very sensitive with an inhibition diameter of 29 and 22.5 mm respectively. Furthermore, Escherichia coli ATCC 25922 and Listeria monocytogenes were tightly less sensitive with an inhibition zone of 21.3 and 18 mm.

The results in table 4 show that the oils exhibited varying levels of antibacterial activity against the investigated bacteria (p<0.05). all bacteria are inhibited at concentrations ranging from 10 μL/mL to 100 μL/mL. Those concentrations are higher than the doses found by Sbayou et al.(2014) and Mighri et al.(2010). In fact, our essential oil showed a significant bacteriostatic activity as specified by the ratio MBC/MIC of 5 to 10 that is >4 (Pankey et al., 2004). This activity could be related to the amounts of oxygenated mono-and sesquiterpene hydrocarbons (Rahman and Sattar, 2011). The presence of β-thujone as a major compound in Artemisia Herba alba may be responsible for its antibacterial activity. Thus, it is difficult to attribute the activity of a complex mixture to a single or particular constituent. Major or trace compounds might give rise to the antimicrobial activity exhibited. Possible synergistic and antagonistic effect of compounds in the oil should also be taken into consideration (Sbayou et al., 2014).

The present work has shown that the essential oil of Artemisia Herba alba collected from the center of Tunisia is doubted of considerable antioxidant and antibacterial activities, hence the possibility of using them as antioxidants and natural antibiotics. This biological activity is strongly linked to the chemical composition of the essential oil and to the concentration of these this aromatic and medicinal plant on secondary metabolites. Research on this essential oil should be continued to better estimate other potential as anti-inflammatory, anti diabetic and antifungal activity, even use it as supplement in the field of animal feeding.