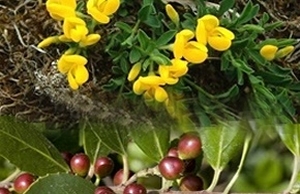 In vitro ruminal fermentation, nutritional evaluation and antioxidant activity of some forest shrubs of North West Tunisia for goats

Chemical composition and characteristics of in vitro fermentation were determined for two shrubs (Genista aspalathoides and Rhamnus alaternus) collected from north western Tunisia. The primary and secondary chemical composition was determined and in vitro fermentation parameters were measured in 100 ml glass syringes for 48 hours to determine gas production. There are significant differences in chemical and wall composition for the two shrubs studied (p < 0.05). Rhamnus alaternus is richer in secondary metabolites (59.2 mg GAE / g DM) than Genista aspalathoides and has the highest content of crude protein (CP). Genista aspalathoides had the lowest anti-radical activity since it has the highest levels of secondary metabolites, so it is the most digestible species with the highest value of gas production after 24 hours incubation and released more methane than Rhamnus alaternus.

Grazing in the forest is an inalienable right and a vital resource (Poupon, 1980). In the Tabarka region (northwestern Tunisia), vegetation cover is of paramount importance in the feeding of flocks (Nsibi et al., 2006). Indeed, the great diversity of woody fodder gives them a particular interest in livestock feeding, especially during the lean season (Fall-Toure et al., 1997) even with the presence of certain limiting factors such as anti nutritional factors which limit consumption and digestibility (Zimmer and Cordesse, 1996). Goats are the best users of woody vegetation because they are best suited to pasture in scrubby environments. They can well valorize the natural vegetation of the pasture thanks to their nutritional and digestive particularities. Their rumen is more buffered and contains more bacteria and protozoa (Rouissi, 1994). The digestion of the forest shrubs by the ruminants is accompanied by a large production of total gas and methane, and consequently a loss of energy (Selmi et al., 2010) In order to optimally utilize the nutritional potential of this natural vegetation, it is necessary to have a good knowledge of its nutritional value and its feed efficiency that may vary from one area to another and from one animal species to another (Selmi et al., 2018).

The rumen content is taken from the animals of the municipal slaughterhouse of Tabarka. It is transferred to the laboratory in a thermos preheated to 39 C.

This work deals with two shrubs, the sampling is done in winter (February), from two different stations in the Tabarka region: Genista aspalathoides from Bou Terfes and Rhamnus alaternus from Dar echfi. All analyzes were performed in triples within the laboratory of the sylvo pastoral institute of Tabarka.

All samples were analyzed for dry matter (DM), ash, organic matter (OM), crude protein (CP), fat and crude fiber (CF) using AOAC methods (AOAC, 1995). The determination of the ADF, NDF, ADL, crude cellulose and hemicellulose contents were carried out according to the method of Van Soest and Maraus (1994), using a semi-automatic Fibertest device.

The determination of the total polyphenols, flavonoids and condensed tannins of the aqueous extracts were carried out respectively according to the methods of Singleton et al., (1999), Yi et al., (2007) and Sun et al., (1998). The antioxidant activity of the aqueous extracts of different samples was evaluated by the DPPH test described by Ammar et al., (2009). The reading of the optical densities is made at 517 nm after 30 min of incubation in the dark. The percentages of inhibitions are estimated according to the following equation:

Fermentation of substrates is studied by the in vitro gas production technique adopted by Makkar (2002). In the laboratory, the goat inoculum is homogenized and then filtered through 4 layers of surgical gauze. The fermentation medium is obtained by mixing in each syringe: 10 ml of filtered rumen juice, 20 ml of artificial saliva and 0.3 g of ground substrate. The syringes were placed in a water bath at 39 C. In the hours following the initiation of the incubation, the volume of the gas is read every two hours until a plateau is obtained. The characteristic parameters of gas production are deduced from the exponential model proposed by Orskov and Macdonald (1979). The digestibility of organic matter (IVOMD) is calculated using the formula proposed by Menke et al., (1979). Metabolizable energy (ME) and total volatile fatty acids (VFA) produced were calculated using the method of Makkar (2002).

Phenolic compounds are considered antinutritional factors and the presence of these compounds in plants limits their use by ruminants. The average content of total polyphenols, flavonoids and condensed tannins showed significant variability among the species studied. Rhamnus alaternus is very rich in polyphenols, flavonoids and condensed tannins compared to the Genista aspalathoides (Table 2). These values are higher than those reported by Selmi et al., (2018). This richness in phenolic compounds explains the important antioxidant power of Rhamnus alaternus (IC50 = 78.6 ug / ml) which is close to ascorbic acid taken as reference antioxidant (IC50 = 61.3 ug / ml) (Table 3). These results are comparable to those published by Kerkatou et al., (2013) and higher than those found by Boussahel et al., (2013).

The kinetic parameters of the in vitro fermentation of the two plant species (Table 4 and Figure 1), were calculated from the exponential model of Orskov and Mac Donald (1979). Indeed, there was a significant difference between the two studied shrubs for the parameter c (gas production rate (h-1)) with the Genista aspalathoides having the highest rate (0.0513 h-1). The total gas production in 24 h of incubation showed differences between the two species. Total volume of gas produced by Genista aspalathoides is smaller compared to that produced by Rhamnus alaternus.

The digestibility of OM, metabolizable energy (ME) and concentration of volatile fatty acids (total VFA) were grouped in table 5. Indeed, the shrubs studied show a significant difference between the values of digestibility. The Genista aspalathoides had elevated levels of ME, VFA and methane compared to Rhamnus alaternus unlike pH of the Genista aspalathoides that registered the lowest value. However, for IVOMD, there was no difference between the two species. These result are lower when compared to those mentioned by Selmi et al., (2018).

The obtained results led us to conclude that Genista aspalathoides and Rhamnus alaternus may be a good feed alternative, especially for small ruminants. Indeed, thse two species had good feed value, a high digestibility and a fairly high palatability. Our work has also confirmed that goats are animal species that are able to adapt to difficult dietary conditions and to take advantage of low ligneous fodder.

Orsskov E.R., Macdonald I. (1979). The estimations of protein degradability in the rumen from incubation measurements weighted according to rate passage. Journal Agriculture Science Cambridge, 92: 499-502.

Van Soest P.J., Maraus W.C.(1994). Method for the determination of cell wall constituents in forage, using detergents, and the relationship between this fraction and voluntary intake and digestibility. J. Dairy, 58: 704-705.

Yi Z.B., Yu Y., Liang Y.Z. and Zeng B. (2007). In vitro antioxidant and antimicrobial activities of the extract of Pericardium Citric Reticulatae of a new Citrus cultivar and its main flavonoids, LWT-Food Science and Technology, 4:1000-1016.