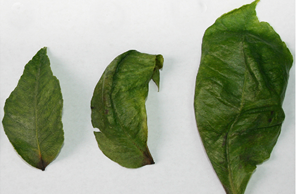 Viroids are the smallest known pathogens of plants. They are single-stranded, circular, rod-like RNAs with no protein capsid no any detectable messenger activity. Citrus is one of the most important commercial fruit crops grown in Morocco. Seven viroids reported to infect Citrus spp. belong to four genera of the family Pospiviroidae. Hop stunt viroid (HSVd) belongs to genus Hostuviroid and consists of a 295-303 nucleotides circular single-stranded RNA. It has been found in a wide range of hosts including several woody and herbaceous crops. Cachexia, an economically important disease of citrus, has been associated with HSVd infection. HSVd isolates are divided into five phylogenetic groups according to the sequence variants: plum-type, hop-type, citrus-type, plum-citrus-type and plum-hop-citrus-type. In this work we present the molecular characterization of six new sequence variants of HSVd obtained from the main Moroccan citrus growing areas: Gharb, Haouz, Loukkos, Moulouya, Souss and Tadla, respectively. The genetic diversity among the Moroccan variants was investigated. Phylogenetic analysis showed that Moroccan citrus HSVd variants were clustered into one group within the citrus-type and the sequence variability seems neither related to the host nor to symptomatology. Despite an accumulation of nucleotide changes, the secondary structure of the viroid mol­ecule was conserved. Since citrus viroids are readily mechanically transmissible via working tools, they affect both old and young plantings in all the citrus groves surveyed.

Citrus is an important crop in Morocco, both economically and socially. The industry occupies about 128.000 Ha with an annual production of 2.2 million tons, 21% of which was exported (Anonymous, 2015). Morocco is classified as the fourth largest fresh citrus exporting country in the world and the second largest exporter of clementine.

Viroids are the smallest known pathogens of plants. They are single-stranded, circular, highly structured, rod-like RNAs with no protein capsid nor any detectable messenger activity (Diener, 1987; Reisner and Gross, 1985; Semancik, 1987). Hop stunt viroid (HSVd) is a member of the Pospiviroidae family and the Hostuviroid genus. Its best known host is hop, but the viroid has a wide host range, including several woody and herbaceous crops. The infection seems to be latent in some hosts such as grapevine (Shikata, 1990; Polivka et al., 1996) and apricot (Astruc et al., 1996). In other cases, specific disorders such as hop stunt (Shikata, 1990), dapple fruit disease of plum and peach (Sano et al., 1989) and citrus cachexia (Diener et al., 1988; Semancik et al., 1988) have been associated with HSVd infection. Sequence variation between isolates affects all structural domains (Hsu et al., 1994), but little is known of the effect of specific mutations on the pathogenicity or host range of HSVd. HSVd isolates are divided into five phylogenetic groups according to the sequence variants: plum-type, hop-type, citrus-type, plum-citrus-type and plum-hop-citrus-type (Sano et al., 1989; Shikata, 1990; Kofalvi et al., 1997; Pallás et al., 2002).

In Morocco, HSVd was reported to infect both apricot (Amari et al., 2000) and citrus trees (Afechtal et al., 2016). In this work, we investigate the genetic diversity among Moroccan HSVd isolates infecting citrus from six different citrus production regions (Gharb, Haouz, Loukkos, Moulouya, Souss and Tadla). A phylogenetic analysis including all characterized sequences was conducted. We also established their relationship with some of those previously characterized from other Mediterranean countries (Amari et al., 2001).

A survey for HSVd was conducted during 2016-2017 in the main citrus growing areas: Gharb, Haouz, Loukkos, Moulouya, Souss and Tadla. A total of 178 samples were collected form commercial orchards of different varieties and age. Among the HSVd-infected trees, six HSVd isolates from different regions were selected (Table 1).

Total RNA extraction was performed on the samples using RNeasy Plant Mini Kit (Qiagen, Germany) and was then used for reverse transcription (RT)-PCR assays with primers specific to HSVd (Kofalvi et al., 1997). PCR products (10 µl) were analyzed by electrophoresis in 1% agarose gel, stained with ethidium bromide and visualized under and UV transilluminator.

Amplified products were purified with the Wizard SV gel and PCR clean-up system kit (Promega, USA), and cloned to the pUC18 plasmid vector (Agilent Technologies, USA), according to the manufacturer’s instructions. One clone from each isolate was sequenced and deposited in the GenBank database under the accession numbers indicated in table 1. Multiple alignment of nucleotide sequences of HSVd was obtained using the Bio-Edit software version 7.0.9 (Hall, 1999) and identity with known HSVd sequences was determined with the BLAST program (Altschul et al., 1990). The alignment was used as input data to construct phylogenetic tree using the phylogenetic and molecular evolutionary genetic analysis software MEGA version 5.05 (Tamura et al., 2011).

During the survey, different symptoms such as phloem discoloration by gumming, bumps and projections on the bark were observed on mandarin but samples were collected from both symptomatic and symptomless trees. Out of 178 samples tested, 23 trees were found to be infected with HSVd, which yields an average infection rate of 13%. HSVd was found in all surveyed citrus-growing areas, particularly in the Gharb region where 21% of the tested samples were infected.

The Moroccan HSVd sequence variants characterized in this work ranged from 299 to 300 nucleotides. Multiple alignment of the Moroccan HSVd sequences was carried out, using Mega version 5.05 (Tamura et al., 2011), together with other 27 HSVd sequences retrieved from the genbank database, giving a total of 33 HSVd sequences. Multiple alignment showed high nucleotide identity ranging from 98.6 % to 99.6 % among the Moroccan HSVd isolates (Table 2). However, six new polymorphic positions were revealed among the Moroccan HSVd isolates at positions: 26, 27, 152, 194, 205 and 206 (Figure 1). The high viroid sequence polymorphism may be associated with the evolutionary history of HSVd RNA, which allowed mutations to accumulate within the lineage. Viroids do not replicate as uniform populations, but as a mixture of closely related variants fitting the quasispecies model proposed for RNA replicons (Flores et al., 2011).

Phylogenetic analysis showed that all the Moroccan HSVd isolates were clustered in the citrus-type group, thus confirming their homogeneous origin (Figure 2). Sequence analyses of different HSVd isolates showed that variations can affect all viroid genome domains, but no specific informations are available on the effect of specific mutations on the pathogenicity or host range of HSVd. Actually, sequence homologies and phylogenetic analysis indicate that HSVd isolates can be separated into three main groups (plum-type, hop-type and citrus-type) and two recombinant minor groups (plum-citrus type and plum-hop-citrus type) (Pallàs et al., 2002).

Cachexia is an economically important disease of citrus and is included in the national health certification program for citrus. The cachexia disease was found in all surveyed citrus-growing areas in Morocco, since most commercial cultivars are symptomless carriers and the pathogen is readily transmitted in buds and highly transmitted mechanically by tools. The most effective means of cachexia control are the prevention of the introduction of infected plant material into the field or greenhouse, strict hygiene procedures, monitoring of trees for unusual symptoms and the use of sensitive diagnostic and detection methods.

Sequences comparison revealed differences at the sequence level within the Moroccan HSVd isolates and with isolates from other areas and different hosts, suggesting that the viroid populations consist of a pool of closely related molecules. Most of the observed variations resulted from an accumulation of mutants emerging de novo during viroid replication.