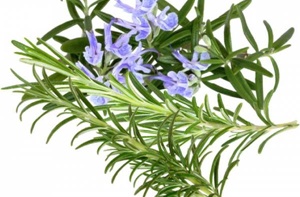 The present study aims to study chemical composition and antioxidant capacity of the essential oils isolated from the aerial parts of rosemary (Rosmarinus officinalis L.) cultivated in northwestern of Tunisia. Chemical composition of isolated rosemary essential oil was determined by gas chromatography and mass spectrometry (GC-MS). Antioxidant activities were determined in vitro using DPPH and ABTS assays. In this research, we identified 31 chemical compounds of the studied rosemary essential oil, and the main constituents were 1,8-cineole (20.07), eucalyptol (18.87), caryophyllene (9.49%), ?-pinene (8.52%), ?-thujone (7.42%) and ledol (6.39). We also showed that Rosmarinus officinalis Essential Oil (ROEO) present an important RSA (Radical Scavenging Activity) against DPPH and ABTS but lesser than BHT, used as reference antioxidant molecule. In conclusion we suggest that the proportion of monoterpenes present in the essential oil obtained from R. officinalis may be among the active principles responsible for the antioxidant activity shown in vitro by ROEO.

In normal physiological conditions, free radicals are constantly produced in small quantities as tissue mediators or residues of energy or defense reactions. This physiological production is perfectly controlled by endogenous defense systems, which are moreover adaptive in relation to the level of radical presents (Wu et al., 2013). Reactive oxygen species (ROS) are produced by various physiological mechanisms because they are useful for the organism at a reasonable dose, but the production can become excessive and the organism must protect itself through various antioxidant systems (Halliwell and Gutteridge, 2006; Wu et al., 2013).

The imbalance may come from a nutritional and/or antioxidants deficiencies provided by food, such as vitamins or trace elements. However, the intracellular imbalance between the production of free radicals and their degradation induce a state of oxidative stress (Delattre et al., 2005).

Among these, rosemary (Rosmarinus officinalis L., Lamiaceae) is an aromatic and medicinal plant. It is grown worldwide, but it is an evergreen perennial shrub native to southern Europe and Asia, especially the Mediterranean region (Al-Sereiti et al., 1999). In Tunisia, it grows wild in the forests of the North-West. It is also cultivated as an ornamental plant and used in traditional medicine due to its richness in compounds and its economic importance.

The aim of the present study was to examine the chemical composition of the essential oils isolated from the aerial parts of Rosmarinus officinalis by GC/MS and to evaluate their antioxidant capacity.

Rosmarinus officinalis aerial parts were collected in April, 2020 from the Sylvo-Pastoral Institute of Tabarka (North-West of Tunisia) and identified by Dr Imen Bel Hadj Ali, Associate professor in the University of Jendouba-Tunisia. The specimens (No. R101) have been deposited with the herbarium of the Higher Institute of Biotechnology of Béja.

The extraction of essential oils of aerial parts of rosemary was carried out using steam distillation for 3 h. Briefly, this method consists in separating the fresh plant material (about 20 kg) from the water (15 L) by a grid located a few centimeters from the bottom of the extractor. The heated water and pressure produce steam enriched in volatile constituents. The floral water is collected in separating funnel and the separated essential oil is collected in an opaque glass bottle.

The compounds were identified using the NIST05 and Wiley 7 databases with a resemblance percentage above 85%. Semi-quantitative data were calculated from the GC peak areas without using correction factors and were expressed as a relative percentage (peak area %) of the total volatile constituents identified. Retention indices (RI) were determined for all the detected compounds based on the retention times (tr) of a homologous series of n- alkanes (C8-C30) (Adams, 2007).

The DPPH test was evaluated according to the method previously described by Grzegorczyk et al., (2010). Briefly, various concentrations of essential oils dissolved in dimethyl sulfoxide (10 to 250 µg/mL) were added to 1mL of 0.1 mM DPPH methanol solution and incubated at room temperature in the dark for 30 min. Then the absorbance was measured at 515 nm. Scavenging activity was measured as the decrease in absorbance of the samples relative to the standard DPPH solution. DPPH radical scavenger activity (RSA) expressed as percentage was calculated using the following formula:

where A0 and As are the absorbance of the control and the sample, respectively. The inhibitory concentration (IC50) expressed in µg ROEO/mL was determined from the graph of free radical scavenging activity (%) versus ROEO concentration. BHT was used as a reference molecule in the same concentration as the test essential oils.

The antioxidant capacity of ROEO were evaluated using the 2,20-azino-bis [3-ethylbenzthiazoline-6-sulphonic acid] (ABTS) method by following the green color shift by spectrophotometry (Siddhuraju, 2006). The inhibitory concentration 50 (IC50) value was determined as the concentration (µg/mL) of the essential oil required to scavenge 50% of the ABTS radical.

The data were analyzed by one-way analysis of variance (ANOVA) and were expressed as means ± standard error of the mean (SEM). All samples were analyzed in three replicates. All statistical tests were two-tailed, and results were considered statistically significant when P < 0.05.

The essential oil distilled from the Rosmarinus officinalis had a strong odor, and the yield obtained of the essential oil was 1.52 % (v/w in fresh matter). The total number of identified chemical constituents was 31, representing 99.96% of the total oil content. In addition, the percentage of each compound of ROEO was presented in table 1 and figure 1.

In vitro antioxidant activity of ROEO

The antioxidant activity of ROEO was evaluated by the DPPH and ABTS free radical scavenging tests and the result was presented by IC50 value, defined as the concentration of the antioxidant needed to scavenge 50% of DPPH or ABTS.

In the present investigation, we studied the he phytochemical composition of rosemary essential oil and its antioxidant capacity.

Phytochemical analysis of ROEO allowed identifying 31 compounds. Interestingly, we noticed that the total number of identified components of the present study is significantly higher than those published previously (Sebai et al., 2014; Rašković et al., 2014; Takayama et al., 2016). The main compounds detected in the ROEO are 1,8-cineole (20.07), eucalyptol (18.87), caryophyllene (9.49), β-pinene (8.52), β-thujone (7.42), ledol (6.39) and bicyclo[2.2.1]heptan-2-one (6.75). These variations in the essential oils composition might be related to plant parts, sites and seasons, hence the phenological stage of the plant, and also the essential oil isolation method (Perry et al., 1999; Teixeira et al., 2013). In this respect, phenolic compounds are affected by geographic distribution as well as altitude (Jedidi et al., 2020).

Concerning the in vitro antioxidant activity of ROEO, we demonstrated a relatively high DPPH and ABTS radical scavenging capacity with IC50 values ​​of 100.6 ± 2.45 and 74.6 ± 1.32 µg/mL, respectively. Our results are in line with previously published data. The positive correlation between free radical scavenging activity and chemical composition of essential oils obtained from the rosemary cultivated in Tunisia was previously demonstrated (Kadri et al., 2011). It has also been demonstrated that IC50 values ​​generally vary among studies. This variation can be explained by different chemical compositions of rosemary essential oils.

Importantly, the potent free radical scavenging activity recorded in the present study is due, in part, to the presence of 1,8-cineole, α-pinene and β-pinene (Wang et al., 2008).

On the other hand, the minor components like major compounds may also contribute significantly to the activity of ROEO. This means that oxygenated monoterpenes, probably monoterpenoid ketones with established antioxidant properties, may have the greatest contribution to the antioxidant capacity of ROEO (Viuda-Martos et al., 2010).

Results of the present study showed that Rosmarinus officinalis essential oils consisted mainly of oxygenated monoterpenes, with 1,8-cineole and eucalyptol as major components. Sesquiterpene hydrocarbons were the least represented compounds. The studied essential oils exhibited higher antioxidant activity, showing a very positive correlation between antioxidant properties and the synergistic effect of compounds in ROEO. Therefore, we suggest that ROEO had potential beneficial effects owing in part to its antioxidant and ROS scavenging activities.

This study of essential oils is helpful in the development of R. officinalis resources for physiological activities, pharmaceutical and fragrance industries. Furthermore, these results can encourage research actions for the exploitation of cultivated strains of R. officinalis that comply with the requirements of different fields of use.