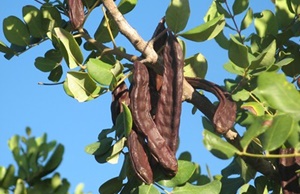 In Morocco, the carob tree is currently enjoying renewed interest with the introduction of a local development strategy based on the development of this resource. Sixty accessions of carob fruits from four regions in northern and southern Morocco are studied for phenotypic and physico-chemical criteria of pods. The phenotypic characterization of the fruits showed that the Chaouen region (north) is characterized by long (13.3 cm), wide (2.02 cm), thick (0.72 cm) and heavy (13.0 g) pods, a high pulp weight (10.8 g) and the lowest seed yield. The southern regions (Beni Mellal and Tafraout) are characterized by relatively short pods with high seed yield. The physico-chemical analysis of the pulp showed a significant variation between the studied regions, ranging from 35.3 to 51.5 % for total sugars, 5.3 to 11.3 % for polyphenols and 11.1 to 14.2 % for total fibers. The three minerals investigated (Fe, Ca, Mg) were detected in all carob samples, mainly in Tafraout, and their contents vary from one region to another.

The carob tree (Ceratonia siliqua L.) is a species scattered worldwide with a controversial origin. Zohary (1973) suggested that the Mediterranean region has been one of its domestication centers (Sidina et al., 2009). The carob tree has been introduced and cultivated in many arid regions of the world. However, its cultivation and production of carob fruits are centered in Spain, Italy, Portugal and Morocco. Geographically, the carob tree in Morocco is distributed along the northern edge of the Atlas and Rif mountains and in some valleys in the south-western part of the Anti-Atlas (Sidina et al., 2009). The ability of this species to develop in these climatic and edaphic contrasts suggests a high degree of adaptability and significant variability within its cultivars.

The fruit of the carob tree is composed of the pulp and the seed. It is of considerable economic importance, mainly because of the use of their precious seed in the extraction of carob gum. This gum is widely used as a food additive in a wide range of processed food products and in pharmaceutical products.

Carob contains low levels of fat and sodium, making it a healthy food source (Makris and Kefalas, 2004). The pods are naturally sweet as they can contain up to 60% sugar, mainly sucrose. They contain an important protein content of about 7.6% (Owen et al., 2003; Biner et al., 2007). Carob is also rich in dietary fiber (up to 39.8%) and polyphenols (up to 20.0%). It is known that the chemical composition may vary from one cultivar to another, mainly due to environmental conditions, the genetic influence of the cultivar, its origin and the harvest date (Tous et al., 2009). This has led to considerable variations in the results published by scientists interested in carob (Avallone et al., 1997; Biner et al., 2007; Bravo et al., 1994; Khlifa et al., 2013; Özcan et al., 2007; Yousif and Alghzawi, 2000).

Carob pulp obtained after seed separation is a good source of dietary fiber, sugars and a range of bioactive compounds such as polyphenols. The bioactive compounds in this pulp have been shown to be beneficial in the control of many health problems such as diabetes, heart disease and colon cancer due to their anti-diabetic, antioxidant and anti-inflammatory activities (Nasar‐Abbas et al., 2016). Carob pulp has a high potential for use as a food ingredient (Tsatsaragkou et al., 2014). Indeed, it can be transformed into powder that can be used as a raw material for food industry. Research has shown that carob can be a good candidate for use as a functional food or food ingredient (Arribas et al., 2019; Biernacka et al., 2017) because it can be a good source of antioxidant polyphenols. Once roasted, carob pulp develops similar sensory characteristics to cocoa powder (Durazzo et al., 2014) (taste and color), but unlike cocoa, carob does not contain thiobromine (stimulants), caffeine and oxalic acid (toxic compound when consumed in large quantities) (Biner et al., 2007).

The possibility of using carob as a food source in a “Moroccan context” has not been studied. Thus, the exploration of new carob-based food products and/or the fortification of carob foods could encourage local food industries and communities at large to use carob in food.

Therefore, promoting carob as a food source and/or industrial ingredient could improve incomes for the rural community that live on carob harvesting. Thus, along with the objective of this work, it is considered that improving knowledge of the food potential of the Moroccan carob could greatly contribute to its promotion as a food ingredient.

Carob fruits were collected from four regions of Morocco, consisting of two regions from the North (Taounate and Chaouen located in the Rif maintain with warm and temperate whether) and two regions from the South Morocco (Beni Mellal region located in the country’s interior featuring a hot semi-arid climate with very hot summers and cool winters and Tafraout region nestled in a valley among the Anti-Atlas mountain referred as local steppe climate) (Figure 1).

Figure 2: Sampling method of pods from the four regions

Morphological characterization of carob fruits collected from the four regions

The morphological analysis was carried out on 50 pods per region. Seven characteristics (considered the most discriminating) related to pods and seeds were studied: pod length, pod width, pod thickness, pod weight, pod shape, pulp per pod and seed yield.

Physico-chemical characterization of carob pulp from the four regions

Three samples from the 15 accessions per region have been used for analyzing the physico-chemical parameters of pulp. Total of 45 entries per region were subject of testing. Total sugars were determined using the sulfuric acid phenol method (Dubois et al., 1956) and the absorbance is read at a wavelength of 490 nm. Dietary fiber is measured by the Weende method. The method of Makris and Kefalas (2004) was used for the extraction of polyphenols where acetone (80%) was used as an extraction solvent. After extraction, samples were analyzed for total polyphenol content using the Folin-Ciocalteu method (Singleton, 1999) reported by Luthria (2006). Two samples per accession were used for mineral analysis. Calcium and magnesium were measured by colorimetric methods while iron content was measured by atomic adsorption spectroscopy.

Agro-morphological characterization of carob fruits collected from the four regions

As depicted in figure 3, we can observe the existence of four pod shapes (straight, slightly curved, curved and twisted) but with unequal frequencies per region. Indeed, pods from the Chaouen and Beni Mellal regions are characterized by the dominance of the straight form which constitutes respectively 58% and 54% of the pods, while pods from the Taounate region are characterized by the dominance of the slightly curved form which constitutes 68% of the pods. Pods from all regions are mostly straight to slightly curved shape (≥78%). According to some authors, the shape of the carob pods can be considered as an agronomic criterion characteristic of cultivars. Thus, in Spain, three different pod shapes have been found in the production of some cultivars, straight shape in the cultivars ‘Duraió’ and ‘Matalafera’, curved shape in the cultivars ‘Roja, Saylonga’ and ‘Ramilleté’ and twisted shape in the cultivar ‘Banya Cabra’ (Tous et al., 2009). The shape of the carob pods is not only of morphological interest, but can also have a positive impact on the collections and its commercial contributions. According to Brito de Carvalho (1988), straight pods are the most popular and easily marketed compared to curved or twisted pods.

The boxplots graphically display the agro-morphological variation in carob fruits from the four investigated regions. From figure 4, we see that carob fruits from Chaouen region have long, wide, thick and heavy pods with higher pulp content per pod compared to the other regions. Seed yield of pods from Tafraout is the highest (25% of pods have between 27-37% seed yield) followed by Beni Mellal (25% of pods have between 28-31% seed yield). Pods from the northern Morocco have higher pod dimension and pulp yield while pods from southern Morocco have higher seed yield. According to several authors, the seed yield of pods is significantly variable particularly in Mediterranean countries where it is in the order of 5 to 27% (Marakis et al., 1988). In Portugal, the average seed yield of 15 cultivars is 10.8% to 18.4 (Barracosa et al., 2007). In Tunisia, seed yield varies from 8 to 30% (Marakis, 1996). In Morocco, Sidina et al., (2009) report values in the range of 17% to 29%.

The boxplots illustrates the quality variation in carob fruits from the four investigated regions. As depicted in figure 5, we observe that carob fruits from Chaouen region are rich in polyphenol, calcium, and sugar while Tafraout is characterized by high iron and magnesium. The total sugar content in the samples analyzed varies from 35.3 to 51.5 g/100 g. The results obtained are in agreement with other work. Indeed, Avallone et al., (1997), Batlle and Tous (1997) and Yousif and Alghzawi (2000) reported total sugar levels ranging from 32 to 60 g/100 g. Fiber contents range from 11.1 to 14.2 g/100g. Some researchers (Calixto and Cañellas, 1982; Marakis, 1996) reported low levels of 3.7 g/100 g of dietary fiber in carob, while others reported high levels of 39.9 g/100g (Yousif and Alghzawi, 2000). The mineral contents obtained for carob pods from four regions of Morocco (Chaouen, Taounate, Tafraoute and Beni Mellal) are similar to those cited in the literature (Özcan et al., 2007; Khlifa et al., 2013; Yousif and Alghzawi, 2000). Indeed, mineral composition (expressed in mg/ 100g dry matter) given by these authors varies on average from 268 to 340 for calcium, 55 to 60 for magnesium and 1.5 to 3.8 for iron.

This work revealed a significant phenotypic variation of the Moroccan carob tree. Indeed, the southern regions (Beni Mellal and Tafraout) are characterized by relatively short pods with the highest seed yield, which may be of interest to the seed processing industry. While the northern regions (Chaouen and Taounate) are characterized by the longest, widest, thickest, heaviest carob fruits with the highest pulp yield. Given the richness of Moroccan carob pulp in terms of its physico-chemical composition mainly polyphenol, iron and sugar for Chaouen and magnesium and iron for Tafraout, its use as a food source and/or industrial ingredient could constitute a source of income for the rural community, particularly in the northern Moroccan regions.

The results of this study can be used as a scientific basis for the promotion of the Moroccan carob as a nutritional and dietetic ingredient that can be incorporated into a wide range of food products.

Luthria, D. L. (2006). Significance of sample preparation in developing analytical methodologies for accurate estimation of bioactive compounds in functional foods. Journal of the Science of Food and Agriculture, 86: 2266-2272.

Singleton, V. L. (1999). Lamuela-Raventos: Analysis of Total Phenoles and Other Oxidation Substartes and Antioxidants by Means of Folin-Ciocalteu Reagent. Methods in enzymology, 299: 152.