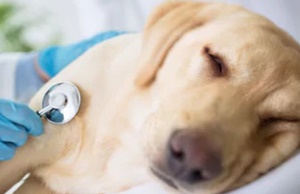 This work is a contribution to the study of tumors in dogs at the Veterinary Teaching Hospital of the Hassan II Agronomic and Veterinary Medicine Institute in Rabat, Morocco. The study aimed to present a summary of the relative frequency of tumors in dogs, their preferred localization and the influence of age, sex and breed. During the study period from 2004 to 2017, a total of 3099 records were consulted, among them 166 cases of tumors in dogs were diagnosed in both sexes, male and female, whose ages were between 3 months to 15 years. Tumors in dogs have a frequency of approximately 5.4% over the entire canine disease diagnosed at the Veterinary Teaching Hospital. The average age group of onset of these tumors are middle-aged dogs of 7-12 years (65.7%). The German shepherd (30.7%), Poodle (22.9%), Labrador (10.2%), Rottweiler (5.4%) and Pekinese (3.6%) would be more prone to tumors. The most common tumors originated from the mammary gland (46.4%) and the skin and subcutis (25.9%). To our knowledge, there was no study like this one considering canine tumors in Morocco. Therefore, this study provides an important preliminary step to characterize and understand the occurrence of canine tumors in Rabat region.

Tumors in pets represent one of the main reasons for consultation and are among the most important causes of morbidity and mortality in the canine and feline species. This condition has been the subject of numerous investigations around the world. Several previous animal tumor registries are still active today (Šoštarić-Zuckermann et al., 2013) and include Veterinary Medical Database (VMDB, 2010), VetCancer Registry, Norwegian Canine Cancer Registry (Gamlem et al., 2008), Danish Veterinary Cancer Registry (Brønden et al., 2010), Animal Tumor Registry of the Vicenza and Venice Provinces of the Veneto Region (Vascellari et al., 2009) and Animal Tumor Registry of Genoa (Merlo et al., 2008). One of the primary objectives of these registries is to obtain an incidence rate of tumors per year per 100,000 dogs. To obtain this figure, it is necessary to know the exact population of dogs in the study area (Šoštarić-Zuckermann et al., 2013; Merlo et al., 2008).

In Morocco, we do not yet have a comprehensive national cancer database that provides a perfect understanding of the incidence and characteristics of cancer in canine and feline species. Moreover, the veterinarian is often confronted with this pathology, but despite significant progress in management, many animals remain without diagnosis and therefore without treatment. Most bibliographic data on tumors in dogs come from studies that focus on clinical and histopathological description and concern animals being treated. In this work, preliminary information on the frequency of different tumor types in dogs at the veterinary teaching hospital in Rabat, Morocco will be analyzed.

The objective of this study is to describe the frequency of tumors in dogs and also the types of tumors diagnosed. The study also evaluates the influence of age, sex and breed to document factors likely to be the origin or incriminated in this pathology.

Compared with existing data, this study is the first of its kind which focuses on all tumor types in dogs, based on a population of dogs presented to consultations.

In order to have an overview of the incidence of the malignant neoplasms in canine population in the region of Rabat, Morocco, a retrospective study was performed at the Veterinary Teaching Hospital of the Hassan II Institute of Agronomy and Veterinary Medicine (Rabat) during the period of 2004-2017. A total of 3099 handwritten documents, collected from the registers, were reviewed. It lists all the animals seen at the hospital and using samples from canine biopsy and necropsy samples that proved to be neoplastic and were sent to the Department of Histology and Pathological Anatomy. Diagnoses were reached by experienced veterinary pathologists performing histopathologic evaluation of standard H&E stained microscopic slides. The samples from surgeries within the hospital were taken from different anatomical sites (mammary, cutaneous...etc).

The datasets were compiled in an Excel file by year and organized according to anatomic location (site) of the tumour and variables set for the investigation were recorded according to age, sex and breed of dog from which a tumour biopsy was taken, or from which the tumour was excised at the surgery or necropsy.

Statistical analyses of collected data were performed in Microsoft Office Excel in order to evaluate the distribution of tumors. All cases were sorted by breed, sex and three age groups of six years as follows: 0 -6 years, 7-12 years, 13 -15 years.

Of those tumors, 60 were in male dogs (36.1%) and 106 were in female dogs (63.8%). Among male dogs, the most frequently diagnosed neoplasms were tumors of the skin and subcutis (19.3%), genital system (4.8%) and oral cavity (3.6%). Among female dogs, tumors of the mammary gland (46.4%), skin and subcutis (6.6%), and liver (3%) were dominant. Detailed information considering the frequency of tumors in a particular body system and distribution in a given body system according to gender is presented in table 1.

The studied population includes dogs whose age is between 3 months and 15 years. The incidence of tumors increases significantly in the middle aged dogs (65.7%), with a clear decrease beyond 12 years (10.8%). When considering distribution of tumors in various age groups, the incidence of tumors of the skin and subcutis was highest in the youngest age groups, while in middle-aged and older (female) dogs, mammary tumors were clearly the most common tumors. Precise data concerning the latter is given in figure 1.

In all these breeds, the most common organ system affected with tumors was the mammary gland, with the exception of the Rottweiler and the Pekinese in which the most common tumors originated respectively from the skin and subcutis, and the bones and joints. The distributions of tumors in the most common breeds are shown in figure 2. Other breeds have not been compared because of their very small numbers.

The results of this study reveal not only interesting aspects but also limitations regarding canine tumor types and frequency. A total of 166 canine tumors reported during a twelve year period in the teaching veterinary hospital in Rabat is not a large sample when compared with the 1172 tumors reported during an eight-year study in northern of Italy (Baioni et al., 2017) and 3378 tumors reported during the ten-year study in a veterinary teaching hospital in the region of Londrina, Brazil (Rossetto et al., 2009). One reason for the relatively small number of samples was the cost of histopathological analysis. When looking at total numbers, our study represents just malignant tumors. This could be explained by the fact that most owners do not treat slow-growing neoplasm or small tumors of their pets.

The body systems mostly affected were mammary gland (46.4 %), skin and subcutis (25.9 %), followed by oral cavity (6 %) and genital tract (6 %). A similar proportion of tumors by body system has been reported by other authors (40.8% skin and subcutis, 34.8% mammary gland, and 7.2% genital (Vascellari et al., 2009); 51% skin and subcutis, 30% mammary gland, and 3.9% genital (Gamlem et al., 2008). It is widely accepted that the perceived frequencies of tumors in these body systems tend to be greater as they are easier to recognize by the owners and physical examination than are tumors of the respiratory tract, digestive tract, and other internal organs that require specific examinations such as X-ray, computed tomography scanning (CT), magnetic resonance imaging (MRI) or ultrasound examination (Merlo et al., 2008). Smaller differences in the proportion of tumors by body system could be the result of different environmental influences or customs regarding spaying of animals between the studied populations and those from other studies.

The sex ratio in our study (36.1% male, 63.8% female dogs) is not equally distributed. This difference can be explained by the fact that mammary tumors, exclusively affect female dog, occupy a frequency of 46.4% of all neoplasms. Our result is supports many previous studies (Anderson and Johnson, 1967; Cohen et al., 1974; Luttgen et al., 1980; Hayes et al., 1983; Bukowski et al., 1998) which showed that females are more affected by neoplasms than males and this is due to the fact that mammary tumors are of great importance in female tumor pathology. According to our study, the males has a high incidence than females of tumors originated from skin and subcutis. The literature also showed that males have a higher incidence than females of skin and subcutis tumors (Cohen et al., 1974; Hayes et al., 1983; Bukowski et al., 1998; Collas, 1997).

The studied population includes dogs whose age is between 3 months and 15 years. The incidence of tumors increased significantly in the middle aged dogs (65.7%), with a clear decrease beyond 12 years (10.8%). These values confirm previous work. Indeed, several studies (Cadiot, 1907; Dorn, 1967; Hayes, 1978; Prymak et al., 1988; Mialot and Lagadic, 1990; Prange et al., 1998) indicated that the incidence of tumors increases significantly with age until 9-10 years, remains constant around the age of 12 years and then decreases. Tumors are therefore diseases of the adult dog.

The distribution of tumors by age group shows skin and subcutis tumors predominate in the youngest age groups and mammary gland tumors are the most common tumors in middle-aged and older age groups in females. A similar distribution is presented by Gamlem et al., (2008).

The distribution of tumors by breed showed breed predispositions. In our study, 156 dogs affected by tumors were purebred (94% dogs) and 10 dogs were crossed (6% of dogs). The most common breed affected in this study was the German shepherd (30.7%), followed by Poodle (22.9%), Labrador (10.2%), Rottweiler (5.4%), and Pekinese (3.6%). Previous studies have shown a predisposition due to racial polymorphism, although the dog populations initially studied differed according to authors. Thus, a previous study made by Priester (1979) shows that pure breeds are much more predisposed than crosses. Pet dog breeds such as Dachshund, Bichon, Poodle, Yorkshire and Pinscher are prone to mammary tumors (Mialot and Lagadic, 1990). Our study shows that both large breeds (German shepherd and Labrador) and pet dog breed (poodle) are prone to mammary tumors.

Large breeds are prone to skeletal tumors (Tjalma, 1966; Brodey, 1970). The high incidence of bones and joints in Pekinese was unexpected and should be the subject of further study.

Until now, there was no study similar to this one considering canine tumors in Morocco. Therefore, this study provides a primary step to better characterize and understand the occurrence of canine tumors in Rabat region. Most of the incidences of tumors are comparable with those from other studies. However, the results and comparison with other studies indicate the need to conduct subsequent studies and the need for establishment of a computer based registry of tumors in domestic animals in Morocco.