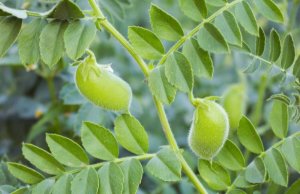 Chickpea genetic improvement in Morocco: State of the art, progress and prospects

Chickpea is the second major food legume in Morocco. Compared to spring type, winter type is more adapted to semi-arid rainfed areas, escaping the frequent end-cycle drought and heat stresses. The winter chickpea breeding program of INRA Morocco aims to develop and release varieties that are well adapted to different agro-ecological areas, with high yield potential, resistant to Ascochyta blight and others diseases and pests prevalent in the target areas. Tolerance to drought and ability for mechanized harvesting are also other important objectives. Other traits, related to seed quality, such as large seed size, cooking time and high nutritional value, are also being introduced in the breeding program. Since 1994, seven winter chickpea varieties were released and registered by the breeding program. Those new high yielding varieties are resistant to Aschochyta blight. However, seed increase and marketing are still needed to make these varieties available to farmers.

Chickpea (Cicer arietinum L.) is an important food legume of the semi-arid tropics and warm temperate zones and is one of the major components of human diet. It is an important source of protein, fiber and micronutrients and plays a vital role in sustainable farming, especially in the wheat based cropping systems due to its ability to fix atmospheric nitrogen in soils (El-Enany et al., 2013; Mantri et al., 2013).

In Morocco, chickpea is the second major food legume after faba bean. It is mainly grown in rainfed and intermediate favorable regions of the country which includes the provinces of Taza-Al Hoceima-Taounate (27%), Meknès-Tafilalet (16%), Fès-Boulemane (12%) and Gharb-Chrarda-Benihssen (24%) (Madrid et al., 2015). The total area under chickpea cultivation in Morocco is estimated to about 60 200 ha with a yield of 718 kg ha-1 and a production of about 42 600 t (FAOSTAT, 2017). Despite this importance, the current chickpea productivity is low and fails to meet the population demand. This is mainly attributed to climatic and parasitic conditions, little use of certified seed and low investment in production techniques (improved varieties, weed management, mechanization).

Constraints to chickpea production in Morocco

Chickpea production is facing several constraints which cause serious pre- and post-harvest losses in most of the farming systems. These constraints are mainly abiotic and biotic in nature.

Climate change is projected to have a negative impact on crop production. In Morocco, chickpea is mainly grown as a rotation crop in the cereal cropping system on residual soil moisture. High temperature and terminal drought are common in different regions of chickpea production, with varying intensities and frequencies and mainly occur during flowering and pod filling stages. Thus, the crop is exposed to stress conditions during the reproductive stage, causing yield losses. Furthermore, there is a need to develop climate resilient chickpea cultivars to sustain its production and productivity.

Weed infestation in spring chickpea range from low to moderate. However, in winter sown chickpea, weeds are a major problem and can cause heavy yield losses.

The specific objectives of the chickpea breeding program are:

Since chickpea is predominantly self-pollinated crop, development of true breeding homozygous genotypes with desirable traits is the main methodology in the breeding program. Like other plant species, the breeding process in chickpea consists of four stages (Toker and Mutlu, 2011):

(i) Creating genetic variation through hybridizations and introduction of germoplasm/segregating material from other sources within or outside the country;

(iii) Evaluation of selected lines; and

To date, a majority of the released varieties represent selections from nurseries introduced from the International Center for Agricultural Research in the Dry Areas (ICARDA). Meanwhile, hybridization is underway to combine important traits and generate diversified material.

A combination of the pedigree and bulk methods is generally used for selection after hybridization in chickpea. The early segregation generations (F2 and F3) are invariably grown in sick nurseries and surviving plant are harvested in bulk. The selection of single plant starts from F4 or later generation. Progeny evaluation is carried out in F5-F7 generations. High yielding and nearly uniform progenies are bulked for replicated yield tests under multi-annual and multi-location yield trials (preliminary, advanced and national trials). Comparative yield trails are conducted at different INRA experimental stations representing different agro-environments: Dry areas (Jemâat Shaim and Sidi El Aidi stations), irrigated area (Khmiss Zmamra and Sidi Allal Tazi), favorable areas (Merchouch station) and high-altitude areas (Anneucer station). These trials are repeated for two to three years and the best lines are selected.

Promising lines are conducted in on-farm trials or demonstration trials with one or two improved lines and the local variety or cultivar as control checks. The objectives of these trials are to grow the new lines under farmer conditions to assess the yield and to obtain the farmers’ views. If the line is superior in yield and corresponds to farmers’ needs, it is considered for release.

The biotechnological approaches of resistance breeding have provided several improved varieties of food legumes with tolerance to abiotic stresses. There is no substitute for these approaches, and they will continue to be the mainstay in the future. However, efforts are needed to improve the effectiveness of these approaches by further refining screening methods for resistance to stresses and identifying new sources of resistance genes in both cultivated and wild species. There is a need to use diverse sources of resistance in breeding programs and to develop varieties with tolerance to multiple stress factors.

Early breeding program, initiated since 1920, put more emphasis on germplasm collection of spring chickpea of large seeded Kabuli types. Breeding work was strengthened in 1943 with germplasm collection of both kabuki and specific Desi types maintained during winter season for Ascochyta blight evaluation. Nevertheless, winter hardy types were maintained at this collection and two spring chickpea of Kabuli type, “PCH34” and “PCH 37”, were released from such program. The requirement of larger seed size and competition of Mexican and Spanish types in the commerce, were a serious handicap for any further progress in the breeding program.

In 1978, INRA initiated a new breeding program on horizontal resistance of spring chickpea to Ascochyta blight (Ascochyta rabiei (Pass.)) with FAO collaboration. Extensive works on screening and breeding methodologies were developed within the framework of the program. About 26 lines with durable resistance were selected. However, the specific nature of blight pathogenic variability in Morocco, limited the release of such breeding material. It is worth mentioning that such program was afterward extended to cover durable resistance of Faba bean to Orobanche and tomato to Fusarium wilt, but this program was not continued.

The renewed interest for chickpea became however very clear through collaboration with ICARDA-ICRISAT program based at ICARDA since 1979. The introduction of the concept of winter chickpea completely changed the configuration of the breeding program. Winter planting in November of winter hardy genotypes was suggested as an alternative option for increasing yield and stability in semi-arid environments. Resistance to Ascochyta blight became a prerequisite in such situation because of the major blast of the disease during the winter season. Potential yields of winter chickpea was increased to more than 2.0 t/ha as compared with 0.6 t/ha of spring chickpea. This represents an overall increase of nearly 210% with an earliness of 25 to 45 days (Kamal, 1990). Two varieties ILC 482 and ILC 195 were released in 1987 but their seed size was too small to be accepted by farmers (Tutwiler, 1994). Further collaboration with ICARDA led to release since 1992 of 7 new winter chickpea varieties with larger seed size among which: Rizki, Douyet, Farihane, Zahour, Moubarak, Arifi, Bochra (Table 1). The average yield potential of these released chickpea winter varieties ranges from 1700 to 2300 kg/ha, compared to Morocco national average of only 589 kg/ha (DPVCTRF, 2013).

There is a large gap between farmer’s and research experiments yields. This gap is largely due to a lack of the appropriate package of practices at farmer’s level and the inadequate supply of quality seeds of the new improved varieties. The unavailability of seed of these varieties has been one of the main handicaps for any use of this new genetic material by farmers. The dissemination of newly released varieties was in most cases through informal channels of farmers to farmers’ seed production.

Large chickpea imports from Canada and Turkey, however, have a significant impact on local chickpea production and will seriously affect the overall impact of INRA’s achievements.

Continuous breeding efforts resulted in the release of seven improved chickpea (Cicer arietinum L.) varieties with improved yield, seed quality, disease resistance and better adaptation to different production zones within Morocco. It should be pointed out however that there is a continuous improvement of seed size. Bochra, the last registered variety, has the largest seeds among the developed varieties. Also, several chickpea breeding lines appear to be promising candidates for future release as improved germplasm or new varieties based on their performance in advanced yield trials (Houasli, 2016; Houasli et al., 2016; Houasli et al., 2019). During 2018 approximately 50-100 single plants were selected for two promising breeding lines noted in Table 1. These lines are proposed for release as a new cultivars in 2019.

• Development of varieties with enhanced resistance/tolerance to stresses and wider ecological adaptation;

• Development of varieties with tall and erect growth habit which will be suitable for mechanical harvesting;

• Development of extra-large seeded kabuli varieties which have premium price in the market;

• Integration of molecular markers in chickpea breeding programs for improving efficiency and precision;

• Systematically evaluated germplasm of cultivated and wild species for identification and utilization of sources of resistance to emerging diseases.